Stayed tuned for upcoming news regarding our annual series!

The Speaker Series has been on hiatus during the COVID-19 pandemic. We are working on the return of more engaging, educational presentations with world-renown speakers. Check back soon! 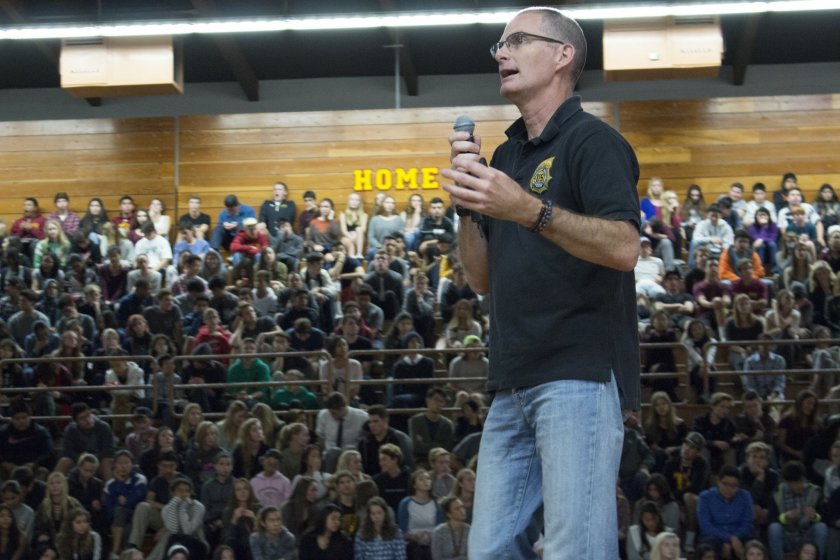 Since 2007 Special Agent Rocky Herron has presented the Drug Enforcement Administration's “I Choose My Future” around the world to over 97,000 middle school and high school students in such countries as the United States, Columbia, El Salvador, Costa Rica, Ghana, Georgia, and Kyrgyzstan.

He has been with the DEA since 1990 and worked on a wide variety of cases including border smuggling, conspiracy, prescription, bad doctor cases, tunnels, and Fentanyl. He has also provided law enforcement training to foreign academies such as the Mexican Federal Police Academy and International Law Enforcement Academy in El Salvador and Hungary.

Herron will give the JSerra community a riveting look at today's culture and send a powerful message to students about the true effects of vaping, drinking, and drug abuse.

Rose is the host of “The Lila Rose Show,” a podcast that tackles faith, relationships, culture and politics.

Rose’s media appearances include Fox News’ Hannity, Tucker Carlson Tonight, and the Story with Martha Macallum, CNN, BBC, and many other national television and radio programs. Rose’s investigative reporting on the abortion industry has been featured in most major news outlets, including the Atlantic, the Washington Post, Los Angeles Times, CBS and ABC Nightline. Rose has written for the Hill, Politico, USA Today, and First Things, among others.

Rose also speaks internationally on faith, family and cultural issues, and has addressed members of the European Parliament and the United Nation’s Commission on the Status of Women. Rose has been named among the National Journal’s “25 Most Influential Washington Women Under 35,” and Christianity Today’s “33 under Thirty-Three.”

Her Speaker Series presentation is entitled "Shifting the Tide: Why This is the Pro-Life Moment."

A native of the San Francisco Bay Area, Rose and her husband reside in Los Angeles.

Author of Tuesdays with Morrie, philanthropist, columnist, and sports reporter Mitch Albom is an inspiration around the world. His books have sold over 35 million copies and have been translated into over 40 languages.

While nationally recognized for his sports writing, Albom is perhaps best known for the themes of hope and kindness that weave through his books, plays, and films. In his talks and presentations, he brings the same inspiring message of community building, giving, and purpose.

His breakthrough book, Tuesdays with Morrie, became an international phenomenon with over 14 million copies sold. Now in its twentieth year, Tuesdays remains one of the top selling memoirs of all time, and was adapted into an Emmy Award-winning TV movie produced by Oprah Winfrey, starring Jack Lemmon and Hank Azaria.

Albom has founded 10 charities, including nine in the Detroit area, such as S.A.Y. Detroit, which operates a family health clinic; A Time to Help, a volunteer organization; and A Hole in the Roof Foundation, which repairs faith-based homeless shelters. He also directs the Have Faith Haiti Mission in Port Au Prince, which helps impoverished children and orphans, as well as the Chika Fund, which provides life-saving medical costs and health care.

A columnist for The Detroit Free Press since 1985 and a panelist on The Sports Reporters podcast, Albom has been named the #1 Sports Columnist in the Nation by the Associated Press Sports Editors (APSE) 13 times. In June 2010 he received the APSE Red Smith Award for lifetime achievement, the biggest prize in sports journalism, and in June 2013, he was inducted into the Sportswriters Hall of Fame.

He is the author of eight bestselling books, with five debuting at #1 on the New York Times Best Seller List, including The First Phone Call from Heaven; Have A Little Faith; The Five People You Meet in Heaven and its sequel, The Next Person You Meet in Heaven.

Albom hosts two radio shows on WJR-AM and has appeared on The Today Show, Oprah, and CBS Sunday Morning. His articles have been featured in The New York Times, GQ Sports Illustrated. Currently, he is developing an hour-long TV show for TNT.

This event was not livestreamed or taped.

Julie Lythcott-Haims began her career as a litigator in Silicon Valley. She served as Dean of Freshmen and Undergraduate Advising at Stanford University, and now she's a writer. From her own life trajectory and from working with tens of thousands of our nations best and brightest young adults, Lythcott-Haims has a clear sense of how we become the humans we want to be, and of what gets in our way.

Bestselling-author of How to Raise an Adult and Real American, Lythcott-Haims has hosted two successful TED talks, and speaks across the country on the dangers of over parenting as well as ways to "throw out the check-listed childhood."

Sarah Swafford is the founder of Emotional Virtue Ministries. She speaks internationally to people of all ages on a variety of topics such as: Emotional Virtue, Dating and Relationships, and Interior Confidence. She is a graduate of Benedictine College and has been involved in ministry for over ten years.

For three years, Swafford worked as a Residence Hall Director at Benedictine College, taking care of 142 freshmen women. That amazing experience gave her a front row seat into the hearts of women and men transitioning from high school to college, giving her a deeper look into the struggles facing teens and young adults today.